Foreign Policy Journal - Kourosh Ziabari: The post-election episodes that have taken place in Iran, which continue to occupy front-page headlines of world newspapers, have perplexed and mystified many.

Although the dissidents who continue to defy the government’s call for an end to the protests over the June 12 presidential election have failed to provide hard proof that the election was rigged in favor of the incumbent, President Mahmoud Ahmadinejad, their suspicions are reasonable and their right to speak out against a perceived wrong unquestionable.

On the other hand, there are those who allege interference by foreign powers attempting to fuel unrest and destabilize the government with the eventual goal of regime change in mind, suspicions which are also not unreasonable given the historical record, which contains no shortage of precedents for similar actions.

The 1953 CIA-orchestrated coup d’etat that overthrew Iranian Prime Minister Mohammed Mossadegh was one such example, well remembered in Iran but often purged from U.S. accounts and unknown among much of the American public.

Stephen Kinzer has done much to remedy this with his book All the Shah’s Men, which documents events leading up to and following the coup in extraordinary detail. An award-winning journalist for the New York Times, Kinzer was at one time also the paper’s bureau chief in Istanbul, and has received an honorary doctorate for his lifelong contribution to journalism.

Stephen Kinzer generously set aside time from his busy schedule, which includes work writing a new book on realpolitik in the Middle East set to come out early next year, to join me in an interview for Foreign Policy Journal to try to clear up some of the ambiguities surrounding Iran’s disputed election and to share his view of the events that have followed and the controversy that has captured the world’s attention.

Following is the full text of my interview with Mr. Kinzer...

Posted by Kourosh Ziabari at 4:01 AM No comments: 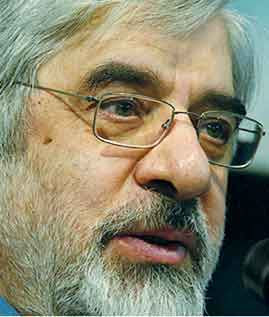 Kourosh Ziabari - Middle East Online: They've mobilized their facilities, packed their luggage and set off their missions to distort, spread out, "separate and rule", "divide and conquer".
Everything began on the eve of June 13's gloaming, the grumbling and whining Saturday of the late spring, when the astounding outcomes of the 10th presidential elections in Iran was chanted by the mass media and electoral commissions, and that was the very beginning of a communal bewilderment and perplexity all over the country, and around the world as well. The friends and enemies, supporters and dissidents, compatriots and strangers, internals and externals, everybody was amazed by the results of the most dynamic presidential elections in the contemporary history of Iran; the incumbent president Mahmoud Ahmadinejad was reelected by a vast majority of 63%, thumping the reformist rival Mir-Hossein Mousavi by a discrepancy of 11 million votes.

Even the most optimistic fans of Mr. Ahmadinejad could not foretell a 24.5m victory will be achieved by their beloved candidate whom in the most realistic situation, would have been beating the reformist contender in a run-off round after coming to a close standoff in the first round; however, everything was over and the congratulatory message of the Supreme Leader had arrived: "the elections of Khordad 22 (June 12) with the creative performance of Iranian nation, set a new record in the long sequence of national elections. The 80% turnout on the ballots and the 24m votes of people to the president-elect is a pure festivity which can guarantee the country's improvement and progression, national security and sustainable contentment with the divine patronages and assistances."

That was the commencement of protests by the foremost failed candidate, Mir-Hossein Mousavi, who could never imagine losing with such a soaring discrepancy. He accused the electoral commission of fraud and manipulation in the elections, and expressed that he would not recognize the results, calling for the annulment of the whole elections.

This was the allegation which the electoral commission denied from the very early moment and declared its readiness to publicize all of the detailed documentations and evidences to prove the healthiness and purity of the elections. They told the public media that we will publish the details of each ballot, an unprecedented elaboration of details which has never been done over the past 30 years.

Mousavi, however, began to issue statements and fervent declarations, calling his supporters to pour into the streets and mount demonstrations. Hundreds of thousands of his fans paid homage to the call of their popular 67-year old former prime minister, and stormed out into the streets of Tehran, creating scenes which the foreign correspondents described as "unprecedented" after the Islamic revolution.
Continues Here
Posted by Kourosh Ziabari at 7:44 AM No comments: